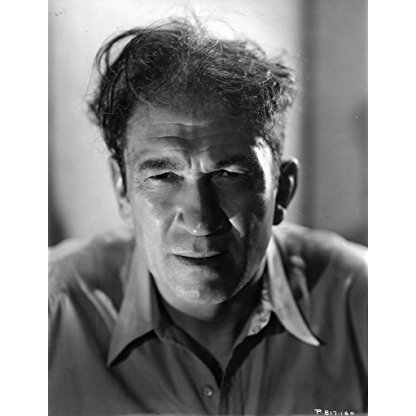 Victor McLaglen was born on December 10, 1886 in  Tunbridge Wells, Kent, England, United Kingdom, is Actor, Soundtrack. Rambunctious British leading man (contrary to popular belief, he was of Scottish ancestry, not Irish) and later character actor primarily in American films, Victor McLaglen was a vital presence in a number of great motion pictures, especially those of director John Ford. McLaglen (pronounced Muh-clog-len, not Mack-loff-len) was the son of the Right Reverend Andrew McLaglen, a Protestant clergyman who was at one time Bishop of Claremont in South Africa. The young McLaglen, eldest of eight brothers, attempted to serve in the Boer War by joining the Life Guards, though his father secured his release. The adventuresome young man traveled to Canada where he did farm labor and then directed his pugnacious nature into professional prizefighting. He toured in circuses, vaudeville shows, and Wild West shows, often as a fighter challenging all comers. His tours took him to the US, Australia (where he joined in the gold rush) and South Africa. In 1909 he was the first fighter to box newly-crowned heavyweight champion Jack Johnson, whom he fought in a six-round exhibition match in Vancouver (as an exhibition fight, it had no decision). When the First World War broke out, McLaglen joined the Irish Fusiliers and soldiered in the Middle East, eventually serving as Provost Marshal (head of Military Police) for the city of Baghdad. After the war he attempted to resume a boxing career, but was given a substantial acting role in The Call of the Road (1920) and was well received. He became a popular leading man in British silent films, and within a few years was offered the lead in an American film, The Beloved Brute (1924). He quickly became a most popular star of dramas as well as action films, playing tough or suave with equal ease. With the coming of sound, his ability to be persuasively debonair diminished by reason of his native speech patterns, but his popularity increased, particularly when cast by Ford as the tragic Gypo Nolan in The Informer (1935), for which McLaglen won the Best Actor Oscar. He continued to play heroes, villains and simple-minded thugs into the 1940s, when Ford gave his career a new impetus with a number of lovably roguish Irish parts in such films as She Wore a Yellow Ribbon (1949) and The Quiet Man (1952). The latter film won McLaglen another Oscar nomination, the first time a Best Actor winner had been nominated subsequently in the Supporting category. McLaglen formed a semi-militaristic riding and polo club, the Light Horse Brigade, and a similarly arrayed precision motorcycle team, the Victor McLaglen Motorcycle Corps, both of which led to apparently erroneous conclusions that he had fascist sympathies and was forming his own private army. The facts prove otherwise, and despite rumors to the contrary, McLaglen did not espouse the far right-wing sentiments often attributed to him. He continued to act in films into his 70s and died, from heart failure, not long after appearing in a film directed by his son, Andrew V. McLaglen.
Victor McLaglen is a member of Actor

Does Victor McLaglen Dead or Alive?

Victor McLaglen’s zodiac sign is Capricorn. According to astrologers, Capricorn is a sign that represents time and responsibility, and its representatives are traditional and often very serious by nature. These individuals possess an inner state of independence that enables significant progress both in their personal and professional lives. They are masters of self-control and have the ability to lead the way, make solid and realistic plans, and manage many people who work for them at any time. They will learn from their mistakes and get to the top based solely on their experience and expertise.

Victor McLaglen was born in the Year of the Dog. Those born under the Chinese Zodiac sign of the Dog are loyal, faithful, honest, distrustful, often guilty of telling white lies, temperamental, prone to mood swings, dogmatic, and sensitive. Dogs excel in business but have trouble finding mates. Compatible with Tiger or Horse. 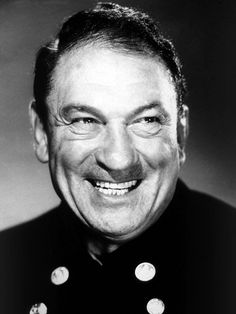 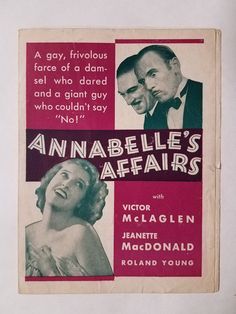 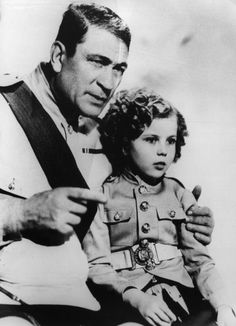 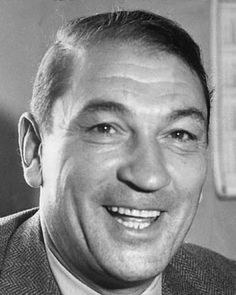 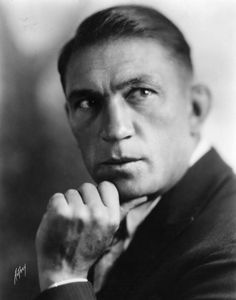 Other siblings included Frederick (born circa 1882), Sydney (born circa 1884), Lewis (born circa 1889) and a sister, Lily (born circa 1893). Another brother, Leopold McLaglen (1884-1951), who appeared in one film, gained notoriety prior to World War I as a showman and self-proclaimed world jujutsu champion, who authored a book on the subject.

Four years later, he moved to Winnipeg, Manitoba, Canada, where he became a local Celebrity, earning a living as a Wrestler and heavyweight boxer, with several notable wins in the ring.He also briefly served as a constable in the Winnipeg Police Force in 1907.

He returned to Britain in 1913 and during the First World War served as a captain (acting) with the 10th Battalion, Middlesex Regiment. Later, he claimed to have served with the Royal Irish Fusiliers. He served for a time as military Assistant Provost Marshal for the city of Baghdad. He continued boxing, and was named heavyweight champion of the British Army in 1918.

Victor McLaglen was married three times. He first married Enid Lamont in 1919. The couple had one daughter, Sheila, and one son, Andrew. Andrew McLaglen was a television and film Director who worked on several film projects with John Wayne. Andrew's children, Mary and Josh McLaglen, are both film producers and Directors. Sheila's daughter, Gwyneth Horder-Payton, is a television Director. Enid Lamont McLaglen died in 1942 as a result of a horse-riding accident.

McLaglen's career took a surprise turn in the 1920s when he moved to Hollywood. He became a popular character actor, with a particular knack for playing drunks. He also usually played Irishmen, leading many film fans to mistakenly assume he was Irish rather than English. McLaglen played one of the titular Unholy Three (1925) in Lon Chaney Sr.'s original silent version of the macabre crime drama.

McLaglen had a support part in Winds of Chance (1925), directed by Frank Lloyd, then made The Fighting Heart (1925) at Fox, directed by John Ford. Ford would have a major impact on McLaglen's career. McLaglen was in The Isle of Retribution (1925), Men of Steel (1926), and Beau Geste (1926), playing Hank in the latter.

McLaglen was the top-billed leading man in Director Raoul Walsh's First World War classic What Price Glory? (1926) with Edmund Lowe and Dolores Del Rio. The film was a huge success, making over $2 million, and Fox signed McLaglen to a long term contract.

McLaglen was one of many Fox stars who had cameos in the musical Happy Days (1929). He was reunited with Edmund Lowe and Raoul Walsh in a sequel to What Price Glory?, The Cock-Eyed World (1929), which was another huge success at the box office.

In 1933, he founded the California Light Horse Regiment, which included a "riding parade club, a polo-playing group and a precision motorcycle contingent". He described it in a press interview as promoting "Americanism". He said it was organized to fight communists and others "opposed to the American ideal", both inside and outside the country. McLaglen was attacked by some on the left as fascist, which he denied. He said he was a "patriot of the good old-fashioned American kind."

At Paramount, McLaglen and Lowe were in No More Women (1934) (a non-What Price Glory? film), then McLaglen made Wharf Angel (1934). He was one of many stars in Murder at the Vanities (1934). At Columbia, McLaglen starred in The Captain Hates the Sea (1934) with John Gilbert. He and Lowe reunited at Fox for Under Pressure (1935) (directed by Walsh) and The Great Hotel Murder (1935).

In 1935, McLaglen spent a reported $40,000 to build his own stadium near Riverside Drive and Hyperion Avenue, near Griffith Park and the Atwater Village neighborhood of Los Angeles. The stadium was used for football and many other activities. The Los Angeles River flood of 1938 seriously damaged the stadium, and it fell into disuse thereafter. In 1941, he was selected as the grand marshal of the Clovis Rodeo parade in Clovis, California.

McLaglen returned to Britain for We're Going to Be Rich (1938) with Gracie Fields. Back in Hollywood he did some films for RKO: Pacific Liner (1939) and Gunga Din (1939). The latter, with Cary Grant and Douglas Fairbanks Jr., was an adventure epic loosely based on Rudyard Kipling's poem that served as the template decades later for Indiana Jones and the Temple of Doom (1984).

At Universal McLaglen teamed with Basil Rathbone in Rio (1939) and Jackie Cooper in The Big Guy (1939). He was top billed in Edward Small's South Seas adventure, South of Pago Pago (1940). He remained top billed for Diamond Frontier (1940), and Broadway Limited (1941).

McLaglen and Lowe then played basically the same roles but under different names in Call Out the Marines (1942) at RKO. He starred in Powder Town (1942) and went to Fox to support Gene Tierney in China Girl (1942). He was one of many stars in Forever and a Day (1943) and had a support role in Tampico (1943), and Roger Touhy, Gangster (1944). McLaglen was a villain in Bob Hope's The Princess and the Pirate (1944) and he could be seen in Rough, Tough and Ready.

His second marriage was to Suzanne M. Brueggeman. That marriage lasted from 1943 until 1948. His third and final marriage was to Margaret Pumphrey, a Seattle socialite he married in 1948. They remained married until his death of a heart attack in 1959.

McLaglen was back with John Ford for Fort Apache (1948) with John Wayne. It was very much a support part, as a cavalry sergeant, but so well received that McLaglen basically reprised it in the other two films in the Ford-Wayne "cavalry trilogy": She Wore a Yellow Ribbon (1949) and Rio Grande (1950).

McLaglen was later nominated for another Oscar, this time for an Best Supporting Actor for his role opposite John Wayne in The Quiet Man (1952). He continued to be in demand as a support actor in action films: Fair Wind to Java (1953) and Prince Valiant (1954). He went to Britain for Trouble in the Glen (1954), an unsuccessful attempt to do for Scotland what The Quiet Man did for Ireland. Back in Hollywood he was in Many Rivers to Cross (1955) at MGM.

McLaglen had a rare late career lead role in City of Shadows (1955) at Republic and he was second billed in Bengazi (1955). However he went back to supports with Lady Godiva of Coventry (1955). He had a cameo in Around the World in 80 Days (1956) then had another lead in The Abductors (1957), directed by his son, Andrew.

He went to Italy for Gli Italiani sono matti and had a good part in Sea Fury (1958), shot in England with Stanley Baker.

On 8 February 1960, McLaglen received a star on the Hollywood Walk of Fame at 1735 Vine Street, for his contributions to the motion picture industry. 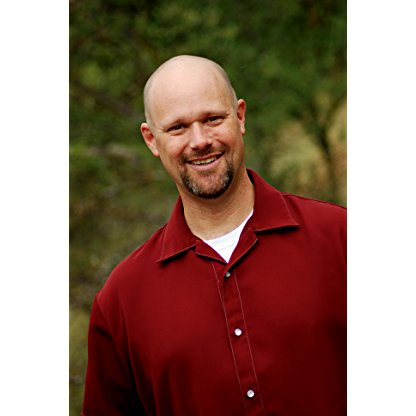