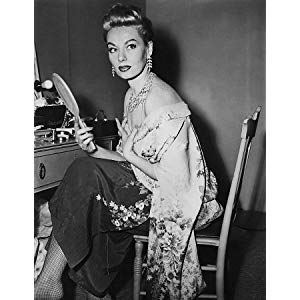 Busty, highly painted blonde Lili St. Cyr was a notorious striptease artist of the 1940s and 1950s who replaced Gypsy Rose Lee and Ann Corio on the burlesque queen pedestal. Lili actually took the stripper out of burlesque and put her squarely on the Las Vegas stage.
Lili St. Cyr is a member of Actress

Lili St. Cyr’s zodiac sign is Gemini. According to astrologers, Gemini is expressive and quick-witted, it represents two different personalities in one and you will never be sure which one you will face. They are sociable, communicative and ready for fun, with a tendency to suddenly get serious, thoughtful and restless. They are fascinated with the world itself, extremely curious, with a constant feeling that there is not enough time to experience everything they want to see.

Lili St. Cyr was born in the Year of the Horse. Those born under the Chinese Zodiac sign of the Horse love to roam free. They’re energetic, self-reliant, money-wise, and they enjoy traveling, love and intimacy. They’re great at seducing, sharp-witted, impatient and sometimes seen as a drifter. Compatible with Dog or Tiger.

Busty, highly painted blonde Lili St. Cyr was a notorious striptease artist of the 1940s and 1950s who replaced Gypsy Rose Lee and Ann Corio on the burlesque queen pedestal. Lili actually took the stripper out of burlesque and put her squarely on the Las Vegas stage. She was also noted for her pin-up photography, especially for photos taken by Bernard of Hollywood. She was married and divorced six times, including small-time actors Paul Valentine and Ted Jordan and well-known restaurateur Armando Orsini. Born Willis Marie Van Schaack on June 3, 1918, the Minneapolis-born entertainer's early life remains somewhat of a mystery. She was raised by her grandparents and had two sisters that went into show biz. Trained in ballet, Lili started out as a chorine at such notable places as the Florentine Gardens. She went on to develop and choreograph her own solo act while featuring herself in the nude. Lili's bare-all debut, at the Music Box, proved disastrous, so she put together a new act. She first became famous performing at the Gaiety Theater in Montreal in 1944. Her club acts quickly became the talk of the town as she would be seen taking a bath on stage or doing the reverse strip. One famous gimmick involved having her G-string, which was attached to a fishing rod, fly off into the balcony as the lights dimmed. This gimmick was known as the "Flying G," and other such novelty bits of business became trademarks as well. She eventually conquered Las Vegas, and it was there that she created her "bubble bath" bit on stage while being dressed by a maid for the crowd. Her notoriety eventually extended outside the U.S.; she was especially well received in Montreal. While Lili was featured in a couple of mainstream acting roles in movies, including Gangsters zonder genade (1954) and The Naked and the Dead (1958), she usually played a stripper or appeared as herself. Some short soft-core films which featured her dancing are more interesting today, such as the Irving Klaw film Varietease (1954). Lili's private life was a feast for the tabloids: six marriages, highly publicized brawls, and attempted suicides. She eventually tired of it all and retreated, starting up a Frederick's of Hollywood-like lingerie business. Her last decades were spent in virtual seclusion until her death on January 29, 1999.